Please help support this website by becoming a patron for just $5 per month. Click here for more info.

I plugged the Tesla into the HPWC at our Anaheim vacation house and set it for maximum charge. This will be less than a 100 mile drive round trip from Anaheim to Downtown Perris, California, but I like to have plenty of safety margin when making jaunts like these. We'll be going with some friends and family to listen to some saxophone jazz in the evening at Spaghettini in Seal Beach and I don't know how much time I'll have for charging between these two events. Going to Seal Beach from Anaheim will be about a 50 mile round-trip. I rarely set the Tesla for a full charge, but the plans for tomorrow seem to warrant it.

Click on each photo below for a larger image. 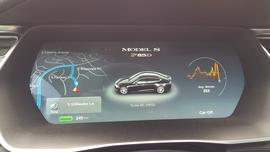 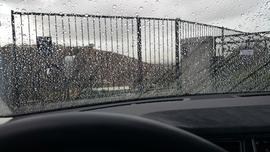 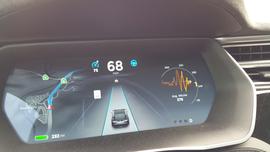 Above: Driving east on the 91 Freeway using Tesla Auto-Pilot

Personally, I only feel comfortable using the Auto-Pilot when it can clearly see both lane markers. Generally I will take over from the Auto-Pilot feature when it can not see both lane markers, such as when driving down a road where only the left side of the lane is marked. Others may be more daring in letting the Tesla drive in Auto-Pilot mode with less solid lane indications, but that is not me. Most highways and most streets with at least 4 lanes (2 in each direction) do have clear lane markings on both sides of the road so I am able to use Auto-Pilot for much of my driving.

Also in the above photo you will see two other icons related to Auto-Pilot. At the time I was driving at 68 MPH as you can see indicated with a digital "68" in the above image. To the left of the "68" you can see a circle icon with an arrow in bright blue. The bright blue indicates that adaptive cruise control is turned on. Below this icon you can see the number "75". This indicates that I set the cruise control speed to 75 MPH. The Tesla will automatically attempt to travel at this 75 MPH whenever possible. If the car in front of me is traveling less than 75 MPH, then the Tesla will automatically slow down to maintain a safe distance behind the car in front. When the car in front accelerates, the Tesla will automatically accelerate to try to achieve the target 75 MPH, but it will not exceed 75 MPH even if the car in front accelerates to faster than that. This means that I can pretty much drive for dozens, or even hundreds of miles, without ever putting my foot on the brake or the accelerator! The Tesla Auto-Pilot adaptive speed control just does it all automatically for me.

To the right of the "68" you can see another icon that looks like a bright blue steering wheel. The bright blue indicates that the auto-steer capability of the Tesla Auto-Pilot feature is engaged. This means the Tesla is steering itself. It is using its ability to detect the lane location to automatically steer and keep the Tesla in the current lane. If for any reason the sensors stop receiving enough information to determine the location of the lane, this steering wheel icon will vanish and a loud alert will sound indicating that I need to immediately take manual control of steering the vehicle. When the sensors once again have enough information to determine the location of the lane, the steering will icon will reappear in gray. The gray steering wheel icon indicates that the Tesla Auto-Pilot Auto-Steering feature is available to be engaged should I desire to do so. When I activate this feature, the steering wheel icon will once again turn a bright blue. 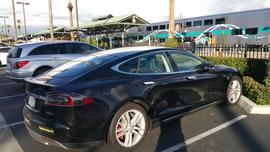 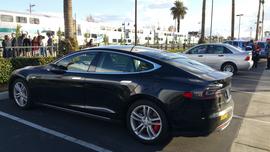 Above: My Tesla parked at the Downtown Perris Valley Station
with the Metrolink train that provided the ride in the background. 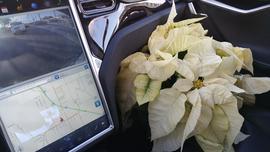 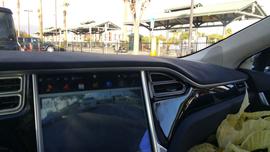 Above: A poinsettia plant that was given away after the speaker presentations.
Click here to read the details from the report. 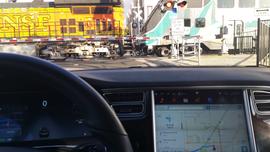 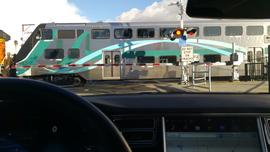 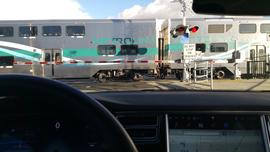 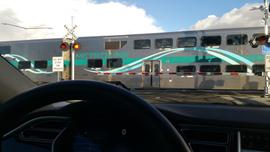 Above: Stopped at the crossing gates watching the
Metrolink train that had provided the train ride go by.

Click on each photo above for a larger image. 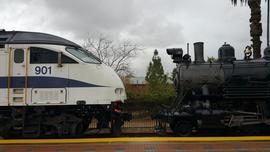 Click here for the report and photos of the event and train ride.

Please help support this website by becoming a patron for just $5 per month. Click here for more info.